Between Pothia, the capital of Kalymnos and the rural area of Panormos, built on top of a steep cliff is the Great Castle of the Town of Kalymnos. The castle is Byzantine but took its final form in 1495 and was continuously inhabited until 1812.

The first rock fortifications are estimated to have been built in the 11th century. At that time, the dangers for the islands of the eastern Aegean had multiplied, mainly due to the naval raids of the Seljuk Turks of the famous emir of Smyrna, Jaha.
Its current form with the high walls that embrace the perimeter of the rocky hill dates back to the end of the 15th century, after the reconstruction of the fortification by the Knights of St. John, who occupied the Dodecanese from 1309 to 1522.
The reconstruction of the castle was decided after the damage suffered in the great earthquake of 1493. By 1495 the new improved fortification was ready.
After its expansion and repair, it was organized and became the residential center of Kalymnos. The residence in the Castle continued until the beginning of the 19th century. Then, due to the gradual increase of the population and the reduction of piracy, the castle city is gradually abandoned and its inhabitants move out of it in the area of ​​the current settlement of Chora.

It is located at an altitude of about 200 meters and is fortified on all sides, while its walls reach 6-7 meters in height, except for the steep sides which are about 3 meters. There are ramparts in various places of the wall.
There are two entrances: the main one on the southwest side and a smaller one, the “porteli” on the northwest side. The main entrance is made of well-chipped stones and closed with a movable door-bridge which went up and down with the help of a chain, while the portal was opened later, during the Turkish occupation.
Its strong walls are adapted to the relief of the rocky peak, which they embrace around, enclosing and protecting a densely populated settlement with a total area of ​​30,500 sq.m., which is estimated to be able to accommodate up to 1,000-1,200 inhabitants.
Inside the castle are preserved in good condition 10 small churches of the period of the 15th to the beginning of the 16th century. Most of them have mural decoration.
Today we can also see inside the castle two water tanks, the ruined houses of the settlement and the so-called “Gourna” which served as an olive mill. In the middle of the eastern wall is a tower, which during the Turkish occupation was equipped with cannons.

Kastelli is a seaside Byzantine castle in northwestern Kalymnos built on a characteristic rock of Cape Aspropountari. It is located opposite the Castle of Agios Konstantinos Telendos and maintained visual contact with the Castle of Galatiani. 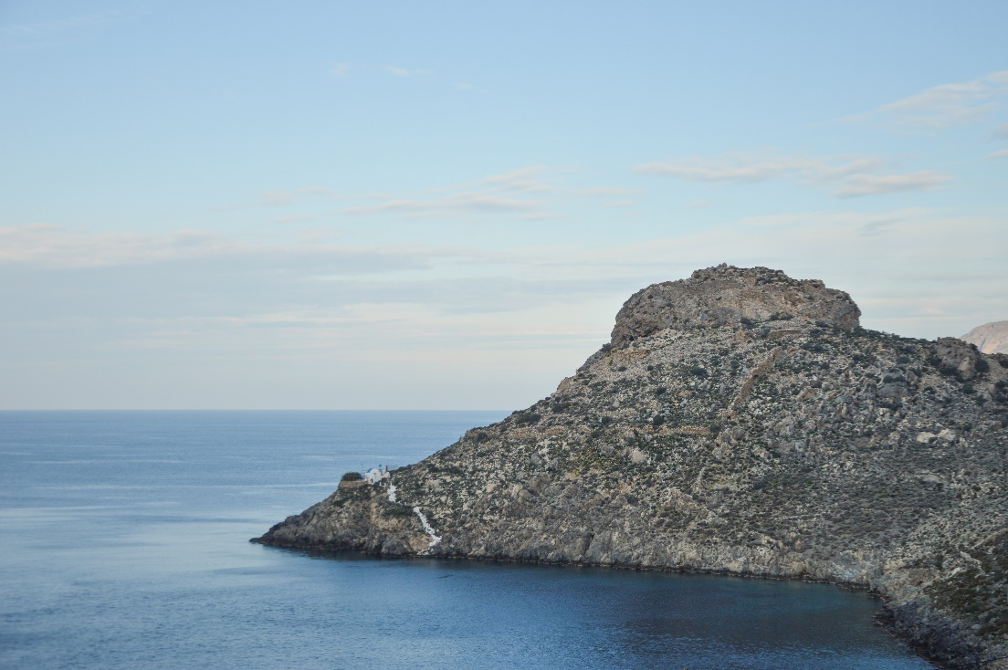 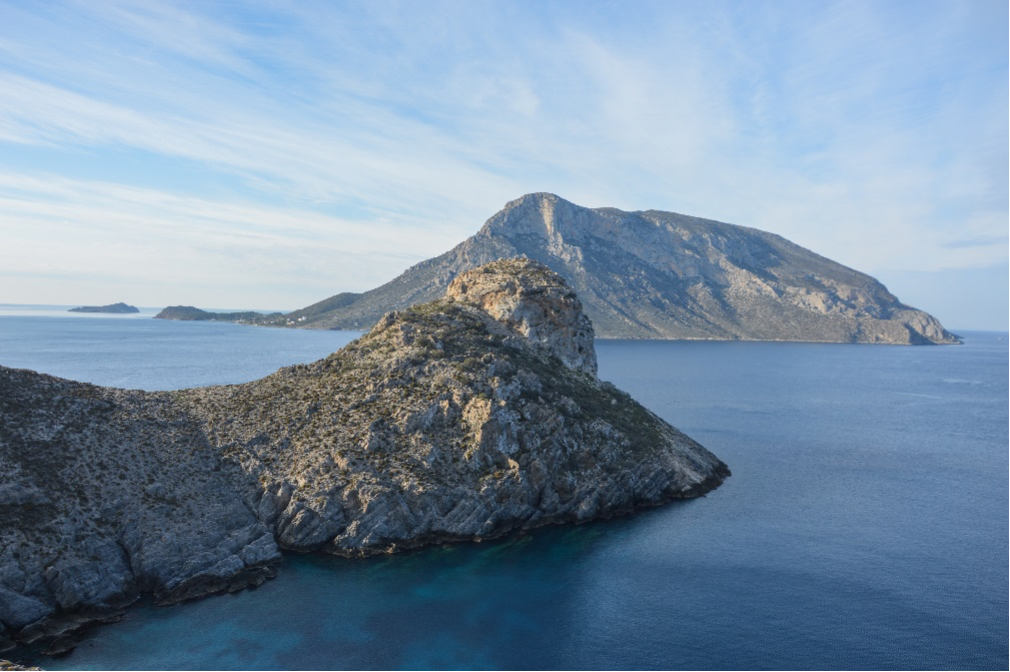 What we conclude from the image of the castle is that there was a very old fortification from the early Byzantine period and perhaps even earlier, from the Hellenistic period. At some point in the mid-Byzantine period, in the 9th or 10th century AD for some reason the castle was abandoned.
In the rock there are few ruins of buildings and fortifications that lead to this conclusion. We can not decide whether there was a remarkable organized settlement.
There is, however, a bold, unconfirmed, but perfectly plausible hypothesis about the history of the castle. But first a few words about the history of Pothaia and the geological past of the island:
Pothaia was an ancient city and the capital of the island from the pre-classical era.

The city continued to exist and flourish during the Roman and early Byzantine periods. However, the ruins of this important ancient and medieval city are nowhere to be seen today, because they are located at the bottom of the sea, in the strait between Telendos and Kalymnos!
In the past, Telendos and Kalymnos were united on one island. In 535 AD. There was a big earthquake and a part of the united island sank and Telendos was formed. In the part that sank was the capital, the ancient Pothaia. According to legend, the earthquake occurred on Good Friday, at the time of the Epitaph procession.
It is almost certain that the castle of Telendos, located opposite Kastelli of Kalymnos, was part of the fortification of Pothaia. But the same can be assumed for Kastelli, although in his case, the image is not as if a piece is missing (as in the castle of Telendos).
We believe that all the indications show that Kastelli was indeed the eastern part of the fortification of lost Pothaia.It is very likely that Kastelli was used for a few centuries after the disaster. The reason it was abandoned is that the rock was now very isolated and exposed, and therefore vulnerable to pirate raids.

All this is completely hypothetical, in the absence of more specific data. However, the indisputable existence of Pothaia at the bottom of the sea strait between the castles of the two islands makes the case very realistic.

In the middle of the route between Chora and Pothia is Pera Kastro or “Chrysocheria Castle”, which is one of the most famous sights of the island. Built at a strategic point, on a natural hill, it provided the possibility of supervising Pothia (the current capital and main port) and communicating with Chora (the Castle).

The castle is known by the names “Chrysocheria“, “Pera Kastro” and “Chrysoserza“. 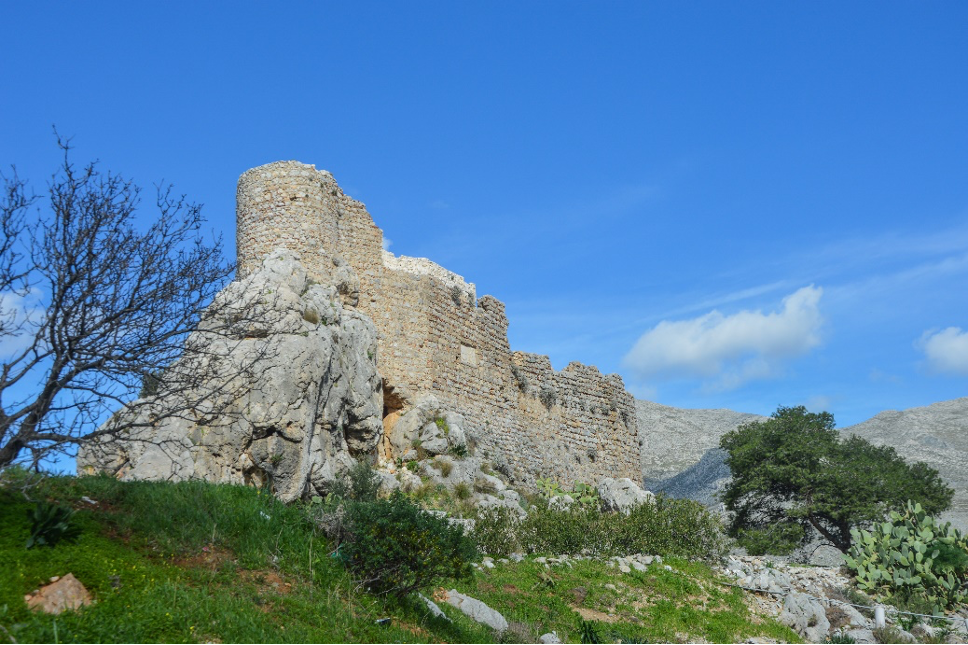 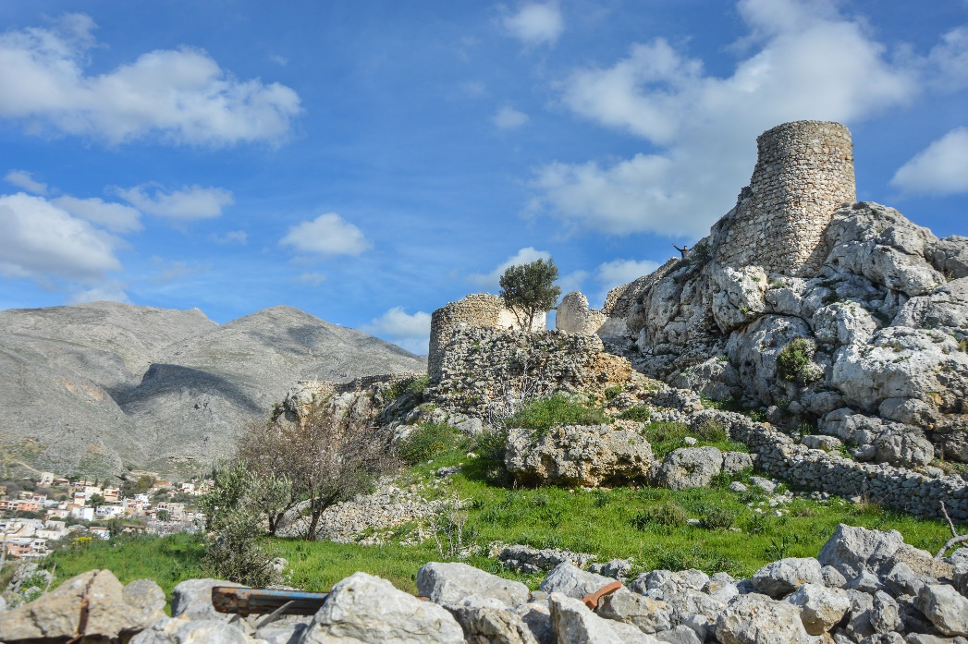 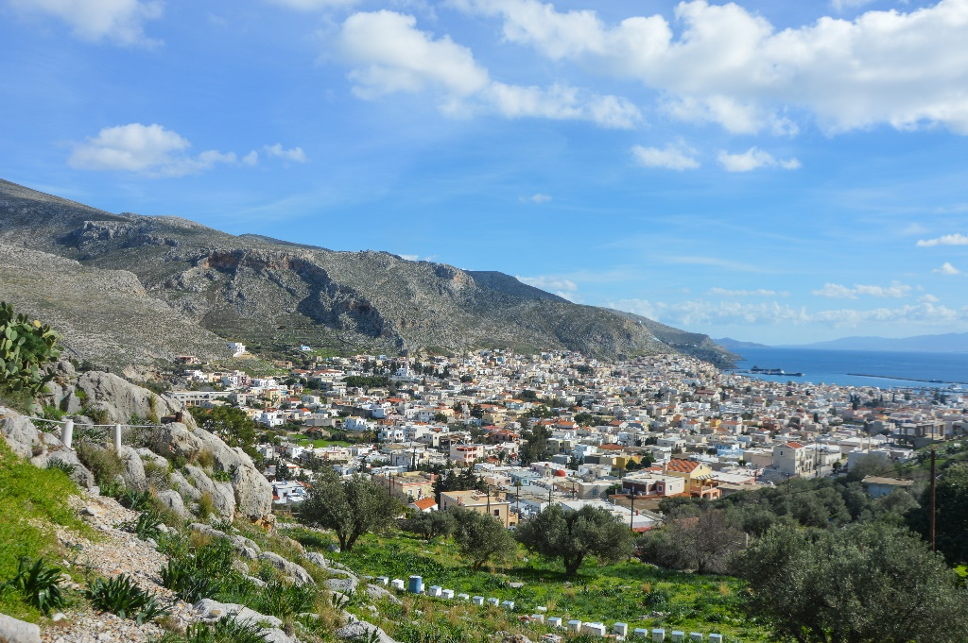 In the years of the Knights, its construction was deemed necessary due to the escalating Turkish attacks. It was primarily a fort-observatory, but in the beginning it was also used for the residence of the commander, who was notably the governor of Kalymnos, Kos, Leros and Nisyros.
The castle of Chrysocheria, together with the mills, was a personal property and residence of the castle. It is believed that it was rebuilt and used by Governor Fantino Querini (1436-1453), who included it in the island’s defense system. After a accusation by Querini and a trial that took place in Rhodes, the inhabitants of the island were forced in 1445 to take part in the work of a castle. These works may be related to the castle of Chrysocheria, because in it there is a coat of arms of Querini, who would obviously repair it for his residence.
The Castle was abandoned relatively early, at the end of the 15th century, because of its small size it could not meet the needs of the population seeking protection from the incessant raids of the Turks. Besides, the Great Castle of Chora, which was handed over in 1495, covered these needs, making the Castle of Chrysocheria useless.

The fortification has the shape of an elongated rhombus, with a main view on the south side, while the rest of the fortification was protected by the natural configuration of the rock.
The main entrance was on the north side, but access was possible from the south wall. A second later entrance was on the east side of the south wall. Inside the castle there were cisterns and other buildings, while below the hill were three conical stone windmills surrounded by circular walls with war chambers. These windmills can be dated after 1522 and today they are, in a way, the “trademark” of Kalymnos.
Coat of arms of Fantino Querini, governor of Kos, and Grand Master (of Rhodes) Jean Bonpart de Lastic (1437-1454) are preserved on the walls of the semicircular tower on the south side of the castle. On the south wall there are coats of arms of the Order of St. John and the knight Giacopo Geltru, commander of Kos after 1466.
Inside the castle the few buildings are kept in good condition: A mineral and built food warehouse, two small churches, the newest of Agios Georgios and the oldest of Panagia.

THE MONASTERY OF AGIOS SAVVAS

Saint Savvas the New was born in 1862 in Eastern Thrace with the name Vassilios. He took the name Savvas when he became a monk. During the last twenty years of his life, he lived in Kalymnos as a priest in the Monastery of Agioi Pantes (of All Saints). He was a great ascetic, iconographer and miracle-worker. He is one of the few recently recognized saints of the Orthodox Church.